Your HVAC system represents your key to comfort whether at home or in your place of business. As the seasons turn, you may use one system more than the other, but both your heating system and AC system play an integral component in maintaining your comfort regardless of the weather outside. While your home HVAC system can be reliable and long-lasting, there comes a time in every homeowner’s life that new HVAC installation is a necessity.

Replacement of either component of your HVAC system can represent quite an investment in your home or business. While the first impulse may be to hire an HVAC repair service in Snellville, GA, to simply repair the ailing system in the interest of saving money, there’s a lot to be said for total HVAC system replacement when either your heating or cooling system wears out. Replacing both halves of your HVAC system comes with benefits that can help ensure that you remain comfortable with a system that can provide optimal performance. Continue reading to learn more about the benefits of replacing your heating and cooling systems together. 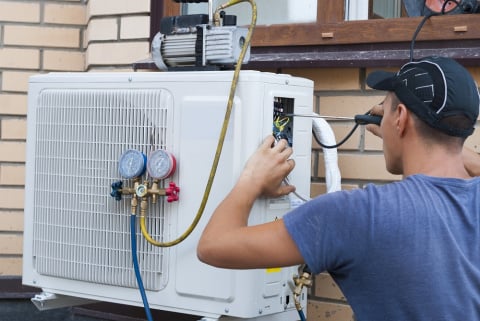 Though the basic principles behind climate control have remained the same in recent years, there have been great advances made in energy efficiency as of late. Because your HVAC system runs almost constantly, energy efficiency is a critical concern. The more efficient your system is, the less it will cost you to run it and the more eco-friendly it will be. That’s one reason that it’s a good idea to replace both sides of your HVAC system at the same time. That allows you to get the most current, up-to-date technology installed in your home or business, which will allow you to leverage improved energy efficiency into lower utility bills regardless of the season.

When one half of your HVAC system is brand-new but the other represents older technology, there can be conflicts that result in decreased performance. In other words, instead of getting the best out of both sides of your HVAC system, the performance of your new equipment is effectively limited by the older component. Using matched equipment ensures that you’re getting the most out of both halves of your system, which will result in better performance, less maintenance, less wear, and increased energy efficiency. For example, your AC and heater share the same blower or air handler. A matched system will feature a blower or air handler that is optimized for both halves of your system, allowing each to operate to its maximum capabilities.

Many homeowners who are faced with replacing part of an HVAC system may think they’re saving money by only updating the ailing component. That may be true in the short term, but over the lifespan of your system that won’t be the case. It’s more cost-efficient to replace the entire system since some components will have to be replaced again when the other half of your HVAC system is eventually upgraded. That means you’ll incur additional costs for labor and materials instead of just paying for those components all at one time. Also, the savings on your energy bills thanks to updated heating and cooling technology will further amplify cost-effectiveness.

When you must replace one part of your HVAC system, it’s more convenient to go ahead and replace the other half as well for many reasons. For example, you may need to take time away from work to be home while contractors are installing your unit. You double that time off if you replace one component at a time. Also, if you’re system is in a hard-to-reach location, it only makes sense to replace the whole system at once and avoid the time-consuming and difficult process of accessing your HVAC system twice. Replacing your entire system at once also makes it easier to keep records, as both components will have the same warranty periods, service schedule, and manufacturer information.